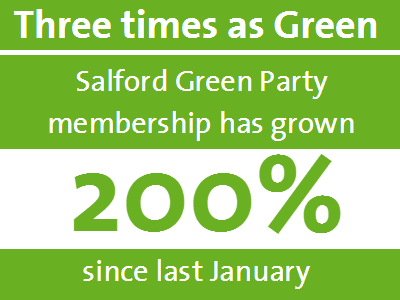 There has never been a better time to join the Green Party.

In this last year we have overtaken the Liberal Democrats in national polls, seen membership surging throughout the country, and growing support for our policies in all areas.

In line with this national Green Surge, our local branch here in Salford has increased its membership by 200% since last January. We've been out on the streets, canvassing and getting involved with local issues, and the people have noticed.

Between growing public disillusionment with the four status quo parties, and new members every day discovering our policies are far more detailed and progressive than the old tree-hugging, sandal-wearing stereotype, there has been a real change in the shape of British politics.

We have a real chance of winning in this next election, all we need is your continued support.

Back to main page